The volcanological unit of the Apolline Project works in strict cooperation with the archaeologists to analyze the interaction of eruptive events in ancient buildings. 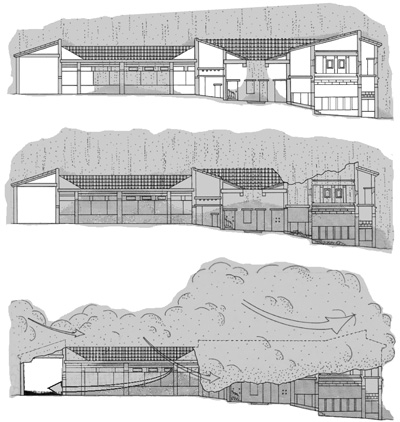 Geology can help to identify the environment in which the ancient settlements developed and, often, to discriminate the natural causes of their destruction or burial. This approach has been largely utilized at Pompeii and Somma Vesuviana, for the reconstruction of the impact of the AD 79 eruption on the roman settlements and could be the reference model for the archaeological excavation projects of the Apolline Project. Inasmuch as our detailed stratigraphic work is integrated with the final resting place and orientation of collapsed portions of the building, we can reconstruct the causes and the timing of the damage suffered by the building.
The picture on the left summarizes the results we achieved by studying the volcanic fill in the House of Julius Polybius in Pompeii (IX 13,1-3). Mount Vesuvius is to the left of the building and the pictures show the destructive effects of the different eruptive phases. (top) Fall products accumulate in the alleys, on the roofs, in the peristyle and the rooms with impluvium during the early hours of the eruption. (middle) Roofs and attics of some front rooms collapse under the pumice lapilli load. (bottom) Pyroclastic currents by-pass the rear rooms and destroy the east-west trending walls in the front part of the house; a reflected flow invades the rooms where the inhabitants had taken shelter.

The volcanic products erupted by the Somma-Vesuvius are not ubiquitously distributed around the volcano but crop out according to their eruptive and emplacement mechanisms and the topography.
Toward the summit of the Mt Somma and along the axis of the most deeply excavated valleys, ancient lavas and scoria cones are exposed. The products of this prevailing effusive activity are covered by the products of explosive eruptions ranging from weak strombolian (e.g. 1874 eruption) to extremely powerful plinian (e.g. 79 AD eruption).
Due to the easterly nature of the wind in the Neapolitan area the dispersion of the fall deposits of the Somma-Vesuvius is usually towards east. The immediate consequence of this asymmetric distribution is the scarce and thinly nature of fall deposits on the northern slope of Somma-Vesuvius. The products of numerous pyroclastic density currents are well exposed along the northern flank of Mt. Somma. They are associated to most of the plinian and subplinian Vesuvius eruptions. Thick and massive deposits are confined in the valleys that drained the volcano; conversely, thinly stratified deposits crop out on the interfluves and in the plain. 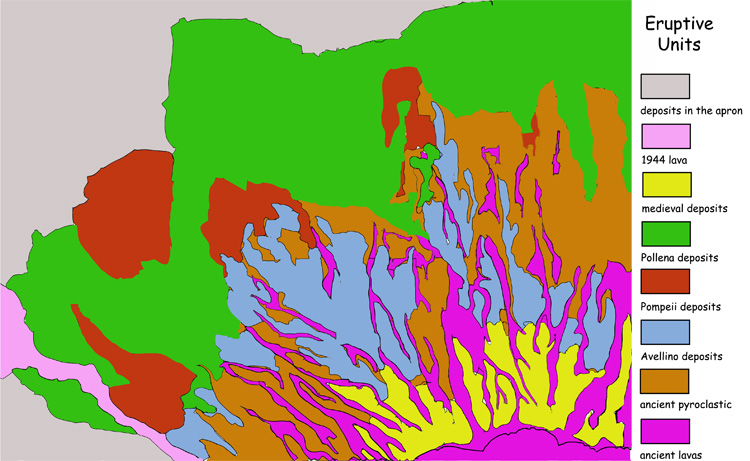 Heavy rainfall occurring during and after explosive eruptions generates floods that easily erode and mix largely uncompacted primary deposits to form lahars.
Our recent investigation along the northern slope of Mt. Somma, shows that numerous secondary events took place during or immediately after the main historical eruptions. In these cases a water-saturated mixture of debris and water with a high sediment concentration, move under the influence of gravity. Lahars are generated on the steep slopes of the Mt. Somma and inundate areas far away from their sources.

The resulting deposits occur in the valleys and on lowlands. During the 472 AD eruption the plain at the foot of the northern slope of the volcano has been covered by few centimetres of pyroclastic density current deposit; in contrast, several metres of debris flow deposits were emplaced during the final phases of the eruption.

A. Perrotta, C. Scarpati, G. Luongo, “Volcaniclastic resedimentation on the northern slope of Vesuvius as a direct response to eruptive activity”, Landslides 3.4 (2006): 295-301

R. Cioni, R. Santacroce, A. Sbrana, “Pyroclastic deposits as a guide for reconstructing the multi-stage evolution of the Somma-Vesuvius caldera”, Bulletin of Volcanology 60 (1999): 207-22

G. Luongo, A. Perrotta, C. Scarpati, “Impact of 79 AD explosive eruption on Pompeii I: relations amongst the depositional mechanisms of the pyroclastic products, the framework of the buildings and the associated destructive events”, Journal of Volcanology and Geothermal Research 126 (2003): 201-23