The Roman Baths in Pollena Trocchia 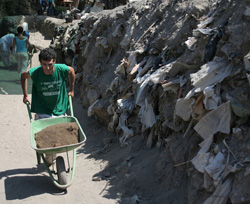 Masseria De Carolis in the modern town of Pollena Trocchia is a Roman bath complex currently hypothesised to form part of a larger villa complex possibly dating to the end of the 1st and beginning of the 2nd Century AD. It was first discovered in 1988 by builders during the construction of some nearby high-rise apartments who were trying to extract volcanic material for use in mortar. In an attempt to avoid disruption to their construction project they attempted to destroy it as gouges still visible in parts of the Roman buildings continue to testify. Fortunately, a local heritage officer stopped this before significant damage was done. Although a brief report was made of the site in which it was deemed to be agricultural stores of the 2nd century, no further investigation was carried out and the site languished. In time it came to be used for illegal dumping, which complicated later investigation.

After Pollena Trocchia was chosen as a case study for the Apolline Project, the Masseria De Carolis site formed a significant part of the investigation. In 2005 the site began to be cleared of illegal refuse and since 2007 seasonal excavations have been carried out. Since then ten rooms have been discovered on two storeys, of which eight have been excavated. Key features include two rooms which house praefurnia (furnaces for the baths), five rooms which constitute the baths per se of which four are fully excavated, an additional room originally used as charcoal depot, a cistern above it and a later indeterminate structure which may be a small oven were added after the main phase of occupation. 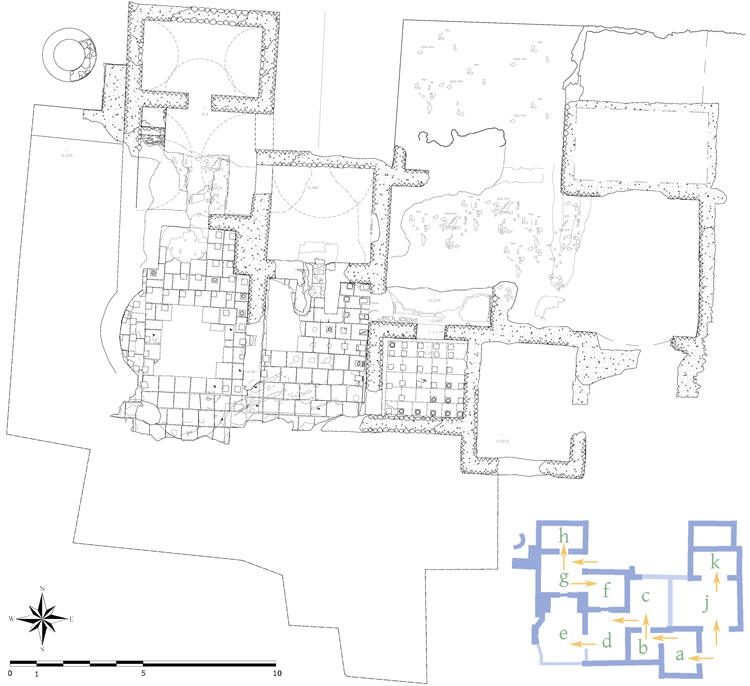 The Baths and the Early Phases 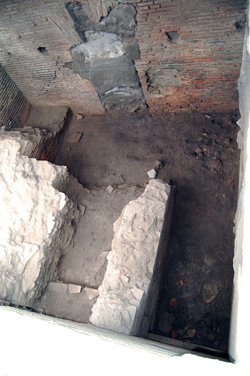 Four of the rooms excavated contain suspensurae, the system by which the floor was raised on pilae to allow the flow of heated air below. The largest of these rooms – the furthest west – contains a small pool and has its own dedicated praefurnium adjoining to the north. This room was accessed through a connecting door in its east wall from another heated room. This was slightly smaller, lacked a pool but was also connected to a praefurnium to its north. This room was also accessed from the east from two other adjoining heated rooms – of which only the southernmost has been excavated fully. This contains no pavement but has all the pilae of the suspensurae intact.
It is believed that these baths date to around the end of the 1st and early 2nd centuries AD. This dating is provided by the terminus post quem of the AD 79 volcanic strata below which include potsherds dateable to the 1st century AD and the brick-stamps of the Domitii brothers (DVODOM) on the hypocaust floor tiles. 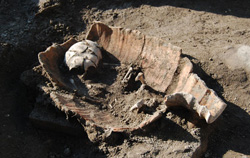 Dating is problematic however, due to spoliation and backfilling in later phases which led to the inclusion of material later in date. It is believed that this occurred in the final century leading up to the eruption of 472, a period in which floor surfaces were removed and several burials placed within the building. The bones of several children have been removed from such contexts.

The Cistern and the Latter Phases 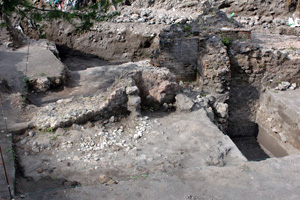 Roman baths require both water and heat. The latter was provided by the praefurnia as already described. For water a cistern was constructed in what is now the northern end of the excavation. The cistern supplied the praefurnia by a system of pipes. In 472 a major eruption of Vesuvius buried much of the site and filled the cistern with volcanic material, bringing this phase of occupation to an end. Immediately after, new inhabitants emptied the cistern of volcanic material and used it as a living space. The eruption had buried the lower storey of the site, and so the new occupants made use of the upper level. A small amount of pottery has been found in the bottom of the cistern from this phase. In addition, they constructed a small structure which is currently being described as an oven or hearth although its exact nature is hard to determine and it is incomplete. This relatively small scale period of occupation ended as a result of either the 505 or 512 eruption of Vesuvius, which buried the site entirely until its rediscovery in 1988. 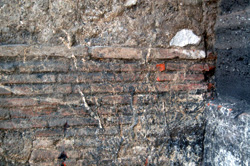 The current sequencing of occupation can be described thus. At the deepest level of penetration the excavation has uncovered what may turn out to be the remains of a 1st century villa, which was overlaid by the eruption of AD 79. Shortly after in the late 1st or early 2nd century the buildings that are now mostly visible – in the form of the baths and cistern – were constructed. The impression of creeping vines along the sides of one of the walls indicates that the site may have fallen into disuse or was at least badly maintained for some time before the eruption of 472 which covered around two thirds of the site. Once this had happened people once again returned to the site, emptied the cistern for use as a living area, made use of other visible parts of the site for building materials and built what may or may not be an oven. Human habitation finally comes to an end with a further eruption. This could be either that of 505 or 512. What is certain is that the volcanic nature of the site provide conditions for archaeological study that provide are highly favourable for reasons both of dating and preservation.