Volcanic Stratigraphy at the Roman Baths in Pollena Trocchia 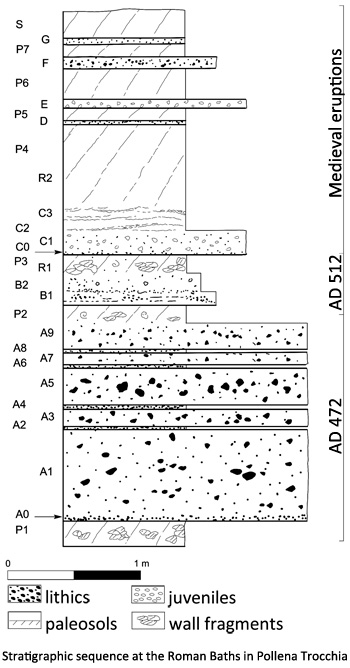 The exposed sequence in the excavation site is made up of seven stratigraphic units.
The basal volcaniclastic sequence consists of five, decimetre to about 2 m thick, massive deposits (A1, A3, A5, A7 and A9) interstratified with thin ashy horizons (A2, A4, A6 and A8). A thin paleosol separates this volcaniclastic sequence from a thinly stratified deposit (B1). The upper bed, B2, is comprised of thick, stratified ash layers. A thin reddish paleosol is observed at the top of this succession.
Unit B is overlaid by a stratified deposit (C1 to C3). This horizon is covered by a thick paleosol (P4). The remnant part of the succession is made up by four thin pyroclastic layers (D, E, F and G) interstratified with paleosols. Layer D is a laterally discontinuous, fine ash layer. Layer E is a massive, well sorted, fine lapilli gray scoria layer. The coarse-ash layer F is discontinuous, with abundant lithic fragments. Finally, the fine ash layer G shows rare scoria dispersed in the matrix. The stratigraphic units have been tentatively correlated with the historical eruptions of Vesuvius on the basis of their lithostratigraphic characteristics. Above the Roman floor, the products consist of thick volcaniclastic beds (Unit A) associated with the AD 472 eruption of Vesuvius. The AD 472 deposit is capped by a very discontinuous and thin paleosol that is covered by stratified and massive ash-bearing beds (unit B). The presence of a poorly developed soil suggests that the products of unit B were emplaced after a brief quiet period following the AD 472 eruption and are consequently related to the AD 512 eruption. The upper, thin pyroclastic deposits are possibly related to the medieval eruptions of Vesuvius; in particular layer F could be associated to the 1631 eruption. As part of this study, we excavated a small trench in the NW corner of the survey area, underneath the Roman floor. The results of the trench show a stratified ash deposit with fragments of bricks, associated with the AD 79 eruption.