Baths of the Blue Nymphaeum 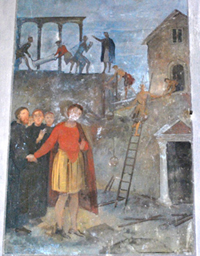 The fertile valley of Lauro is located east of Vesuvius between the Samo mountains and the inner Apennines. In this valley lies the city of Lauro, most famous for its Lancellotti Castle. In the castle is a church, where an extraordinary fresco depicts the Orsini prince supervising the spoliation of an ancient building for the creation of the church of San Giovanni del Palco, at the edges of the town.
Indeed at the foot of this church, spread out over several terraces which run down the slope of the hill, a thermal complex was discovered in the 1980s. The baths where probably part of the Roman villa depicted in the fresco. The remains that were found seem to point to various phases of the complex, dating from the second century BC until the 472 AD eruption of Vesuvius when the complex was abandoned. 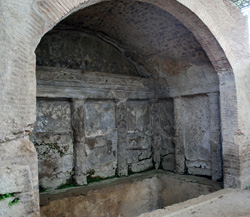 While visiting the site, one can easily recognise the typical layout of a thermae; at least three rooms were for hot baths (calidaria), one of which seems to have served as a sauna (laconicum), and one additional room for taking a cold bath (frigidarium) in a covered pool (natatio) that was originally decorated with marble slabs.
The heating system used for the hot baths is still visible. During use, the hollow space beneath the pavement was filled with heated air (hypocaustum) with the water supplying the system connected to a nearby cistern (caput aquae).
On one of the lower terraces there is a beautiful nymphaeum from the Tiberian age that contains an apsidal fountain with a basin and a small shrine along its outer edges. The shrine marks the beginning of a series of niches whose walls were decorated with mosaics of blue and white tesserae. In many places the mosaic is lost, which may have occurred before the eruption of AD 472. The mosaic that survives show scenes of extraordinarily detailed beauty such as vases with plant life, still nature with parrots and scenes of deer hunting.

The room facing the nymphaeum may have been used for banquets (triclinium) in its first stage. Several centuries later it was converted into a space for oil production, with two grindstones and a press, until the eruption of Vesuvius. 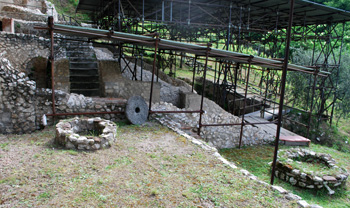 During antiquity, the whole valley of Lauro, with its low hills and numerous springs, was full of Roman villas whose inhabitants enjoyed the scenic surroundings as well as its fertile soil. However, written sources for this region are scarce and often they are limited to describing only the spots in which they were found. Therefore, we have no conclusive data on how this area was used. The villa with the baths and the remarkable blue nymphaeum has not been studied since the 1980s. The Apolline Project has obtained permission to study the whole site along with the materials that were unearthed during the earlier excavations. The Project is carrying out a comprehensive study of the architectural remains and is initiating the study of the artefacts.