The Dionysiac Villa in Somma Vesuviana (aka Villa of Augustus)

What is this site about? 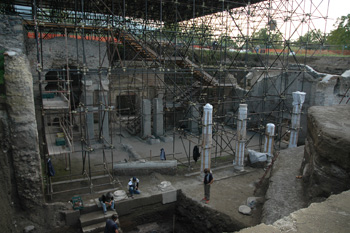 The rooms excavated so far probably constituted a monumental entrance of a vast Roman villa, which was built in the mid-2nd century AD. The character and function of these rooms changed several times until the entire site was buried due to a volcanic eruption in AD 472. 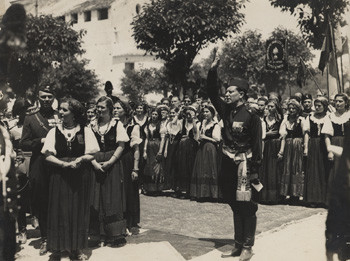 This site was discovered during agricultural activities in the 1930s. Excavation began through the close friendship between Alberto Angrisani - pharmacist and amateur historian in Somma Vesuviana - and Matteo Della Corte - Director of Excavations at Pompeii. A brief excavation brought to light Roman columns, capitals, fragments of a statue, and coloured stuccoes.
The size and splendour of the architectural remains were associated with the ancient literary sources describing Augustus' death, and the site was interpreted as the last residence of the first Emperor of Rome. Although many prominent scholars and the local population of Somma Vesuviana (who even sent a letter to Mussolini) showed great interest in the site, the lack of funds and the imminent war obliged the suspension of the excavation work. 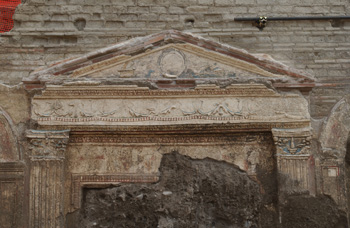 New excavation began in 2002 as part of a multidisciplinary project by the University of Tokyo.
The rooms excavated so far are majestic and were probably used as audience halls to welcome visitors. The largest room has a colonnade on one side, two walls with niches, an arcade with pilasters, and three doorways decorated with Dionysiac motifs. To the west of this room is another one, originally paved with marble slabs and a mosaic; subsequently it changed its original function and was divided into two parts; one part was used for food storage, and the other as a stable. In the period shortly before the eruption in AD 472, the roof fell down on the floor, and an oven was built on top of that rubble.
Two stairs from the largest room lead to a lower terrace, where there are two other rooms, each having an apse (semicircular recess). Both rooms were richly decorated and probably used as audience halls. 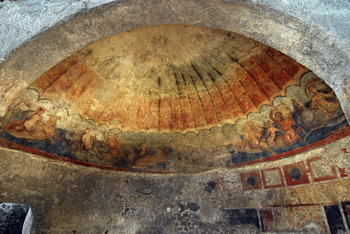 The apse of the larger room is decorated with fresco paintings showing a pavilion and Nereids and Tritons. The apse of the smaller room is similarly decorated with a pavilion motif, but it also shows Dionysiac symbols on the side wall and has a mosaic floor decorated with geometric patterns and dolphins on waves. In a corner of this room a basket, a wooden box, and an amphora have been discovered; these objects were still in use at the time of the eruption in AD 472. There are three cisterns (or storage pits), all built in a later phase, between the two stairs. The cisterns were filled with rubble, in which some artefacts have been found: for example, a marble torso of Silenus, a herm of Dionysus, and a funerary inscription.
The terrace is connected to another one on a lower level, where a wine cellar has been found. The wine cellar has several dolia (large earthenware jars), still half-buried in the ground, in which grape juice (must) was still fermenting at the time of the eruption in AD 472.
Although the findings to date from the excavation do not validate the hypothesis that this villa belonged to the Emperor Augustus, it nevertheless provides ample evidence to understand late antique Campania.

In the Roman period the fertile hills of Vesuvius were covered by vineyards. Wine was the main agricultural produce of the area, and the pagan god Dionysus/Bacchus was the patron of wine and these hills. The evidence from this building proves that the close association between Vesuvius and Dionysus continued even after the eruption of AD 79, which tragically buried Pompeii and Herculaneum. The main room has many representations of grape bunches, and the stuccoed doorway is decorated with symbols of Dionysus, mystic rituals of his cult, and satyrs and maenads as his companions. A marble statue of Dionysus himself - represented as a young boy holding a panther cub in his arms - was originally placed in a niche, where it remained even when the entire building was transformed into a unit for agricultural production. During this transformation, a wine cellar was added to the lower terrace; we can take this as a sign of cultural continuity, despite the significant changes that occurred in religious beliefs and economy in the wider area.