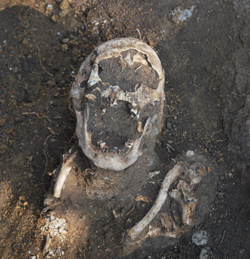 During the Summer 2012 season, the Apolline Project undertook a preliminary review of the skeletal material recovered thus far from the medieval church of Sant’Arcangelo at Roccarainola. While the process of organizing and assessing the research potential of the collection was challenging, it proved to be a nonetheless rewarding task. Throughout the course of the season, participating students were involved in the cleaning of the bones, and seminars in the basics of human osteology were conducted for those interested in further instruction.

So far, the collection of bones from Roccarainola consists of a minimum number of 51 individuals recovered from various locations across the site. While the results of the Summer 2012 study season are only basic in scope, they are fascinating to say the least. Among the pathological and non-metric observations made thus far are numerous cranial depression fractures 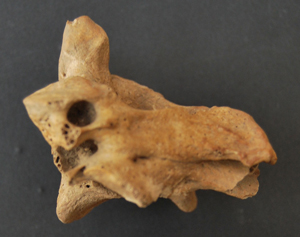 and traumas in various states of healing, a fibula showing signs of possible leprosy on the diaphysis, the fusion of the second and third cervical vertebrae indicating Type I Klippel-Feil syndrome (a condition known to occur in only 1 out 42,000 individuals), a high frequency of parietal formaina (small cranial perforations), as well as the partial remains of an extraordinarily robust man estimated to be of incredible stature. Perhaps most interestingly, many long bones recovered from the pit-like structure referred to as the Pozzetto show signs of having been partially cut and then broken for some unbeknownst reason. Future work on the collection may involve C14 dating, DNA analysis, isotope analysis, and an in depth study of the skeletal evidence for the occurrence of violent assaults to gain a better understanding of the history of conflict within this population and potentially between others.

A Closer Look at Specific Tombs

In front of the western entrance leading to the main body of the church structure, there exists a roughly square area delineated by low walls. This area contained two burials, designated as Tomb 5 and Tomb 6. Both tombs consisted of disarticulated and incomplete skeletal remains. Tomb 5 held the incomplete remains of an individual of indeterminate sex, aged to about 45 years. By analyzing the curvature of the sacrum it was determined that the individual suffered from scoliosis. Meanwhile, in the same area, Tomb 6 also consisted of 1 individual, this one being a very robust male, aged between 30 and 40.

A third burial, Tomb 4, was discovered along the eastern boundary of this same area, the walls of which were assembled from tufa slabs and likely once had bricks covering it. The remains of at least 13 individuals were found in this tomb. Owing to the disarticulated and incomplete nature of the skeletons, it is likely that the bones were moved from their primary deposit at some point in time. Amongst these bones, the remains of another male of incredible robusticity and stature were identified. At least 3 juveniles were also found within Tomb 4.

South of the main entrance to the main body of the church, another tomb was located. Although this grave, Tomb 7, had escaped the notice of previous archaeological excavations, it had not eluded the attention of grave robbers. As a result, it proved to be a thoroughly jumbled assemblage of the disarticulated remains of at least 4 individuals.

To the east of the main structure, a small pit --the Pozzetto-- was found to be filled with the incomplete skeletal remains of at least 32 individuals. This area had been excavated by a different group of archaeologists back in 2005. Amongst the remains of these individuals was a cranium with a peculiar “X” incised on the right frontal bone peri or post mortem, as well as a healed depression fracture. Numerous cranial fragments were found to be exceptionally thick, and affected by various traumas. Amongst the remains was a mandible showing possible signs of tuberculosis. 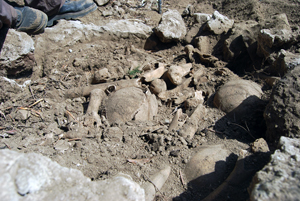 The Pozzetto presents several matters of interest, among them the abundance of long bones that appear to have been cut either peri or post-mortem. This find is of great significance as the cutting of human bones is as of yet unattested to during this period in the history of Campania. Potential explanations for such an activity range from ritual practice to limited storage space for long bones. In the near future, we hope to analyze the cut marks using a scanning electron microscope to gain a greater understanding of the implement used to inflict them. Additionally, we have undertaken a refit project and have succeeded in matching three cut bones from the Pozzetto with cut bones from other tombs allowing for the tracing of the removal of bones from one area of the cemetery to another. 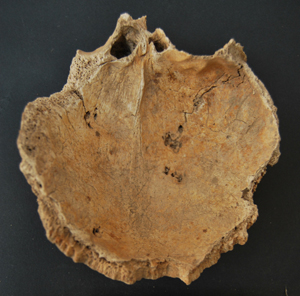 Another area of investigation involves the unusual cortical thickness and extra bone growths apparent in the bones of many members of this population. We hope to establish a definitive link between this and the high concentrations of fluoride in local water sources by taking into account recent research showing that volcanic activity can contaminate water and food with high levels of fluoride. Additionally, the roles of occupational stress, temperature and evaporation rates will also be considered.