The Medieval Church at Cammarano, in the town of Roccarainola

The site at Roccarainola sits atop the Cammarano Hill, to the South-West of the “Vado di Carpine” mountain-pass. This was one of the main ancient routes between the plain of Nola and the Samnium. The hill, which reaches a height of 279 m. a.s.l., is subject to olive and hazelnut cultivation. Before the Apolline Project became involved with the site, partially exposed structures were already evident. The north-south orientation of the walls was clearly visible, and it was already possible to tell that Roman materials had been reused in constructing the building, whatever it would turn out to be. Additionally, a significant quantity of potsherds – mostly medieval – had been found distributed across a wide area surrounding the site. 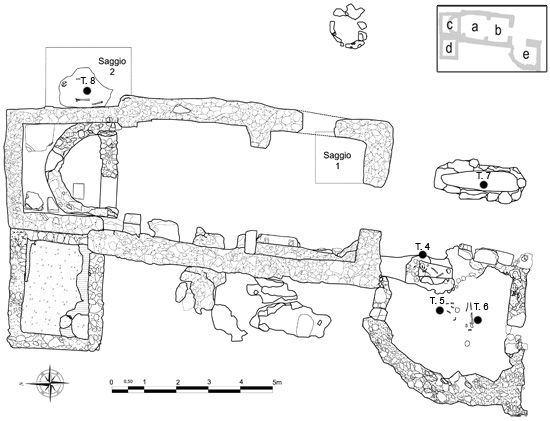 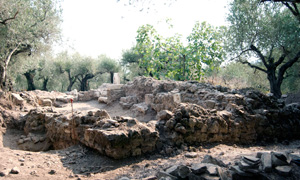 The excavation shed further light upon the structures of which the walls mentioned above formed a part. A North-South orientated ‘main body’ of the building was discovered. It is ca. 8.30 m. long and ca. 7.40 m. wide and is divided in two parts, Rooms ‘A’ and ‘B’. A smaller room with a slightly divergent orientation sits to the north, termed Room ‘C’, while another small rectangular room (‘D’) adjoins Room ‘C’ on Room ‘C’s western wall. To the South of the main body lie other partially preserved structures. These seem to delineate, especially on the West side, another room (‘E’). 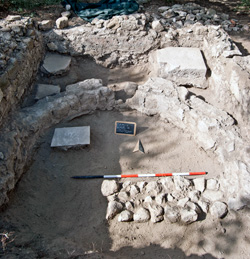 In Room ‘C’, which marks the termination of the main body of the structure at its northernmost extent, we can see an apse which probably belongs to a previous phase as it lies beneath the East and West walls of an earlier (?) room. A straight wall closes the front of the apse, which is preserved only at foundation level. There are no traces of the original paving with the exception of some pieces of marble slabs, found in situ. To the west the apse joins a rectangular room, the inner surface of the walls of which have feature a waterproof coating and cocciopesto paving. A receptacle for the collection of water lies in the room's South-Eastern corner. When the exterior facing side of the western wall was cleaned, the presence of a layer composed by an accumulation of mortar and paving preparation fragments was revealed. This layer in turn covered further structures, also orientated at eccentric angles.

In front of the western entrance to the main body low walls built of unfinished limestone fragments and held together by a gray-brown mortar delineate a roughly square shaped area containing two burials. A third burial was found at the eastern boundary of this area. This burial was assembled with tufa slabs for the walls and very probably by bricks for the roofing. The remains of at least four people were found inside the burial. The disarticulated state of the bones suggests that they were moved from their primary deposit. Another burial was found on the other side of the entrance to the ‘main body’. Although it had eluded previous archaeological excavations, it had been disturbed by grave robbers. Outside the main building, to the East, a small well filled with remains of at least four people was found. Here it seems especially likely that the bones had been removed from their original context owing to the incomplete nature of the disarticulated skeletal evidence. 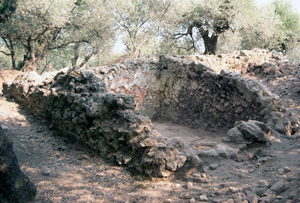 All the walls of the site have common features, although some differences are present. Opus incertum is the principal style of masonry work, with more or less regular texture. Within the fabric of the walls there is a large amount of reused Roman materials: marble, tile, pottery, fragments of dolia, amphorae and even limestone blocks belonging to what are likely olive press are all present. These materials probably originated from an earlier building in the area of Cammarano Hill. The western wall of Rooms A and B has a generally smooth wall texture, although the arrangement of the rows is untidy. However, the tufa blocks are quite regular in shape, with a largely square profile. The East wall of the rooms A and B – along with room C - shows a less regular arrangement. In this case, the tufa fragments are of varying size and arrangement into rows does not appear to have been attempted. This contrasts with the wall of the apse, which instead is made of regularly arranged tufa blocks. The walls of Room D were prepared by opus incertum using medium-sized unfinished limestone blocks (ca. 0.30 m.). These were held together by a gray-brown mortar. Room E was constructed in the same way, but larger limestone blocks were used. In the lowest part of the wall very large inclusions – from the presses mentioned above – have been used in the construction phase.

Establishing a clear stratification for the site has proved difficult, preventing us from precisely dating the walls. This issue stems from the geology of the hill on which the site is situated. The rugged limestone outcrops combined with the topography of the hill have severely impeded the buildup of sediment. As a result strata are thin and it is difficult to determine their interfaces. In addition, the illicit excavations that preceded proper archaeological investigation altered and removed contexts below the topsoil. However, analysis of pottery has yielded a very small percentage of Roman period forms. The corpus is dominated by late antiquity/early medieval pottery, along with a scattering of late medieval pottery.

Based upon current evidence, it appears likely that the construction of the structures now visible was undertaken during the early medieval period, which we believe to be when the site reached to its zenith. The pottery evidence, combined with the lack of further construction or alteration of structures, seems to suggest a gradual decline in the late medieval period.