Overview of eruptive history of the Somma-Vesuvius

The Somma-Vesuvius volcanic complex is regarded as one of the most threatening volcanoes worldwide because of its violent explosive activity and the high number of people living at the foot of it. The volcano, which dominates the Neapolitan landscape, is mostly known for its large plinian eruptions such as the catastrophic AD 79 eruption, that buried the Roman cities of Pompeii and Herculaneum, although many other eruptions have occurred.

The first phase of volcanic activity in the area of the Somma-Vesuvius volcanic complex, is recorded exclusively in the 2072 m deep Trecase well. The outcropping volcanic rocks created the old strato-volcano (Mt. Somma), whose activity ended with a summit caldera the incremental collapse of which is associated with various plinian eruptions. Its volcanic activity is characterized by several plinian eruptions occurring every few thousands years and more frequent subplinian to strombolian and effusive episodes.

Deposits of this eruption, dated to about 18.3 ka BP, are made up from base to top: a plinian fall with minor surge deposits and a succession of lithic-rich fall, surge and flow deposits. The plinian fall blanketed a vast area (>2600km2) east of Vesuvius, producing an estimated volume of 4.4 km3 and ranking this eruption as the largest event of Somma-Vesuvius eruptive history.

The Greenish Pumice stratigraphic sequence (16 ka BP) is subdivided in numerous lapilli and fine ash fall beds, interstratified, in the upper half of the succession, with two ash-bearing pyroclastic density current deposits.

The Avellino eruption (3.7 ka BP) is similar to the Pompeian eruption of AD 79. During the opening phase of the Avellino eruption it generated a phreatomagmatic ash layer. Then, a continuous plinian phase produces about 3 km3 of reverse-graded pumice fall deposit. A change in eruptive style forms a thick pyroclastic surge bedset that covers an area of over 400 km2.

The products of three different eruptive periods occurred between Avellino and Pompeii plinian eruptions have been termed ‘protohistoric’.

The eruption began with a weak phreatomagmatic explosion covering the volcano with an ash deposit. Next, a pumice lapilli fall from a plinian column 14 to 32 km high covered a large area south of the volcano; the maximum thickness of the fall deposit (2.8 m) was reached 10 km south of the volcano in the city of Pompeii. Several pyroclastic density currents were produced immediately before, during and after the fallout phase of the grey pumices: they flowed mainly to the north, west and south. Some cities, such as Herculaneum, that were little, if at all, affected by the pumice lapilli fallout, were reached by pyroclastic density currents whose emplacement temperature was as high as 400 °C.
During the first phase of the eruption, at Pompeii, hundreds of people were killed initially by roof and wall collapse under the weight of fall products. The successive eruptive phase was characterised by pyroclastic density currents that destroyed and completely buried the Pompeian area, killing people regardless of their location.

Historical literature reports a probable eruption at the beginning of the third century.

The products of four explosive eruptions and some lavas were emplaced between the 5th and 11th century.

The eruption of December 1631 AD was a violent subplinian event. It started on December 16 with the formation of a sustained eruptive column that produced a dark lapilli deposit. In the same day several pyroclastic flows were observed that emplaced ash deposits. Lahars and floods occurred at the end of the eruption all around Vesuvius and in the plain to the north and represent among the most destructive phenomena associated with this eruption.

After the violent eruption of 1631 the volcano entered a stage of almost persistent activity with numerous effusive-explosive eruptions. 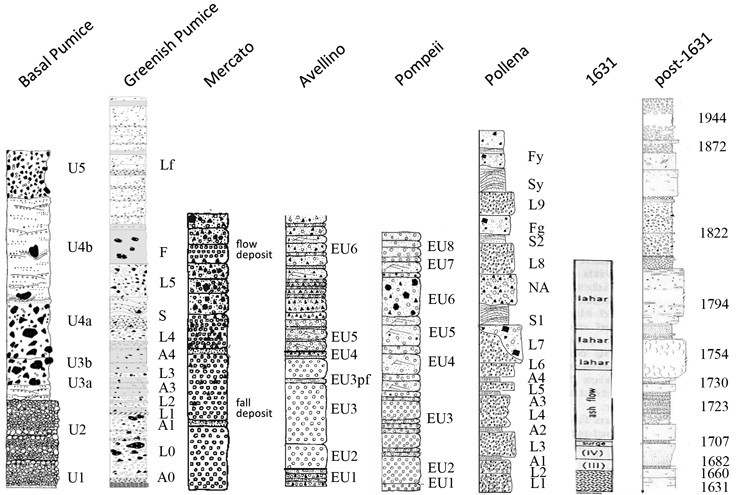