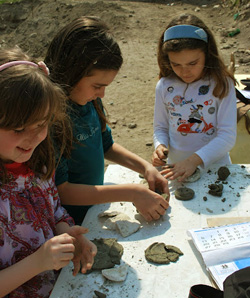 Our goals are to preserve the heritage of the areas lying in the shadow of Vesuvius and to bring a greater awareness of its cultural wealth to the academic community and to the wider public. We see our students as our partners in that venture - as aspiring archaeologists and heritage professionals.

We are a non-profit, self-funded project, which means that most of our funding comes from student participation, donations, and supplies and support from the people and institutions where we operate. We charge minimal student fees with the goal of making participation feasible for all qualified applicants.

We are, however, ambitious in terms of our standards for the restoration of the site, our research aims, and the overall quality of our excavation. The balance of keeping costs affordable but standards high is a difficult one to achieve, but one to which we are strongly committed.

Student contributions are not enough to maintain that balance. We also rely heavily on the generosity of members of the public and heritage enthusiasts to help us meet these expenditures. Every extra bit of support directly benefits the students, the excavation, and the local population, with whom we work closely.

If you would like to work with us to further our research goals, we would appreciate your donation, no matter how small or large. When you donate, we would like to encourage you to specify how you would like your gift used. Donations, for example, can be used for the refurbishment of our archaeological laboratory or for scholarships for student participation. For 1000 Euros, we can create a scholarship in your name, either for one season or recurring year-to-year. These are just two examples of ways that you can help bring the heritage of the Vesuvius region to the forefront and to support the people dedicated to preserving it.

We also have several featured research and development projects for which we are seeking assistance:


If you donate to a particular cause, we will keep you updated as to the results of the project. We will also feature the results on our website, in academic publications, and on our social media pages.

To send an email requesting more information, write to: info@apollineproject.org, or to donate now, simply click the 'Donate' button below.