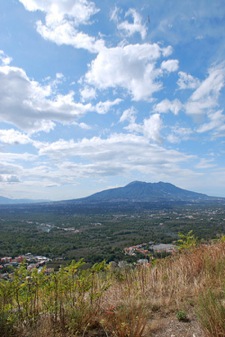 The Apolline Project was founded in 2004 with the intention of using modern towns in the area immediately north of Vesuvius as case studies to progress archaeological investigation in this area. While the areas surrounding Pompeii and Herculaneum to the south have received significant attention, the northern region – encompassing the ancient territories of Neapolis and Nola – have not been subject to the same level of research.
As a result, even excellent works of reference such as the Barrington Atlas of the Greek and Roman World can give the misleading impression that this part of Campania was unoccupied in antiquity. However, significant finds from projects undertaken since the 2002 excavation of the ‘Villa of Augustus’ site at Somma Vesuviana indicate that the area was not only populated but recovered from the eruption of AD 79 faster and to a greater extent than the territories to the south. By focusing on the northern area primarily the project seeks not to privilege that area at the expense of the south, but to build on previous research to increase understanding of the interactions that took place between and across the region.

The realisation of the potential this region for archaeological investigation led to the creation of the Apolline Project by the Comune di Pollena Trocchia, Suor Orsola Benincasa University and Brigham Young University in Provo (UT). Since then the project has evolved and various universities have become involved with different aspects of the project. For example, Università degli Studi di Napoli Federico II has become involved with the volcanological aspect of the project. 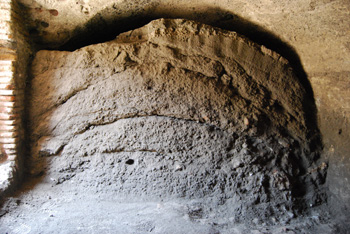 The research aims of the project fall into two parts. Firstly, while the eruption of AD 79 is rightly well known for the archaeological opportunities it has provided another opportunity is offered by subsequent eruptions. In particular, the eruption of AD 472 provides a terminus ante quem for many sites yet to be studied in the region. This provides a ‘snapshot’ of various aspects of late Roman society not unlike that which exists for the Late Republican and Early Imperial periods as a result of the AD 79 eruption. Levels of preservation are often extraordinary and even types of bioarchaeological data that is rare elsewhere has been found; fossilized fig leaves and the imprints of creeping plants on the walls of buildings are two useful examples. The Apolline Project seeks to capitalise on this opportunity, and research is currently being carried out with the aim of developing our understanding of the Late Roman period in areas such as trade patterns. Secondly, the study of the North Slope has the potential to enhance archaeological knowledge well beyond this immediate area. Interactions between various settlements have transacted the region and extended into other areas of the Empire. Increasing our knowledge of one under investigated part of a larger system will improve our understanding of that system as a whole.

The Apolline Project seeks to utilize various types of sources from across the region and from a range of periods. These include accounts of Bourbon era discoveries, the writings of amateur historians such as Count Ambrogino Caracciolo di Torchiarolo and archaeological finds now removed from their original contexts (such as a Roman column base now being used as a font in the local church of SS. Annunziata). Such information has been used to create an archaeological map of the territories of Naples and Nola as well as a more localized version for Pollena Trocchia – a small modern town located on the North Slope. This has in turn provided a context within which our ongoing excavations at the site of Masseria de Carolis in that town can be understood. This site has been under investigation since 2005 and since 2007 excavations have taken place annually, making the site one of the major foci of fieldwork for the project. The site comprises a bath complex and due to its size may form part of a villa. 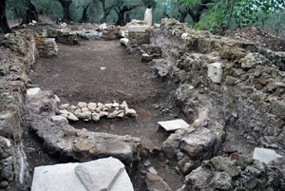 Since 2010 the project has expanded and fieldwork has now been undertaken at numerous other sites in the region of various types, including a residential villa near Nola and the site of an early medieval church at Cammarano in modern Roccarainola. Work at Roccarainola is particular promising. The remains of the church interact with those of the Roman era as the church is partly constructed from the remains of Roman olive presses and further evidence of Roman occupation – such as a cistern and wall – are to be found. The site may offer insights into the changing fortunes of the local olive trade in the Campania region relative to other parts of the Empire. It also serves to demonstrate the inclusive approach taken by members of the Apolline Project, and local land owners and enthusiasts have contributed in various ways to the continued success of the project.

Methodologically, since its inception the Apolline Project has been a space for innovative theory and practice. In a recent example of this, drawing upon the work of scholars such as Bentley and Maschner (2003) on Complex Systems, at the 4th Conference on Late Roman Coarse Ware (LRCW) in May 2011, the Apolline Project delivered a paper which used this theoretical model as a basis for understanding trade patterns in Roman Campania (De Simone et al. forthcoming).