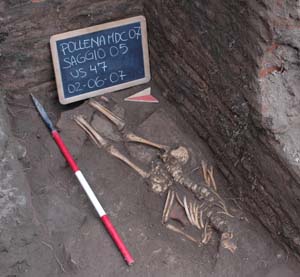 Study of the funerary and osteological evidence obtained from the site of Masseria De Carolis permits us to affirm that, contemporaneous with the last phases of the life of the complex (precisely at the time preceding the 472 eruption of Vesuvius), a part of the site was set aside solely for funerary purposes, primarily for the burial of infants. This practice is known to have been common in the Late Antique period, especially in bath complexes; however, the case that we are presented with at Pollena Trocchia is unique in that it is the first of its kind in the Somma-Vesuvius region. 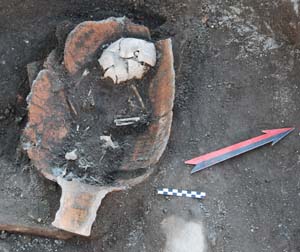 Anthropological and paleopathological analysis conducted on the skeletal remains has yielded significant insights into the lives of the individuals interred at Masseria De Carolis. The skeletal assemblage consists of 4 neonatal skeletons, 1 skeleton of a child aged 5±9 months, as well as a jaw belonging to an adolescent aged 12±3 years. Additionally, several damaged bones were recovered from work carried out in the 1980s, among them those of a female approximately 15 years of age and those of an adult older than 40 years. The upper limbs of this latter individual were highly developed, indicating that during life they relied heavily on the use of their arms to transport weights, but did not execute labor necessitating the use of the shoulders, seeing as the vertebral column does not show the tell tale signs of having born great stress. Meanwhile, the cause of death of the child aged 12±3 years can be attributed to inflammation of the periosteum (the thin membrane covering the outer surface of bones) during the time of transition from primary to secondary dentition. As for the four infant burials, are all of neonatals ranging from newborn to 2 months old. 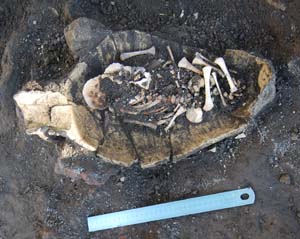 Amongst these, perhaps the most fascinating are the two enchitrysmòs burials deposited less than one meter apart from one another with the same orientation. What is peculiar is that these infants were deposited in positions in exact opposition to one another with the heads positioned adjacently. The fact that these two amphorae are in such close proximity and that the tradition of infant inhumation in amphorae is reminiscent of the womb, suggests a blood relationship likely exists between the two children. DNA analysis is currently being undertaken to establish this with greater certainty. 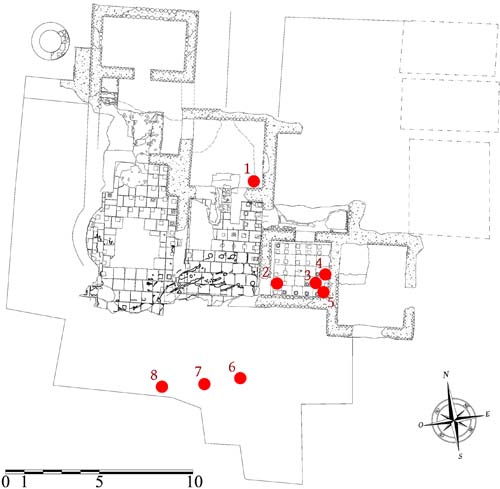