Environmental Archaeology investigates the interaction between man and nature in the past. This interaction starts with the natural environment which has developed over millions of years, to arrive at the Holocene (the last 6,000 years), to finally at our periods of interest, the Classical period and the Middle Ages. Climate and geology (including volcanology) combine to form the basis of the natural environment of rivers, plains and mountains that we see today. Man, of course, has imprinted his mark upon the natural environment. He has changed it by building roads and towns and he has tamed it through harnessing water supplies, growing food and raising animals. In turn, humans can be greatly affected by nature’s power in the way of floods, droughts, and of course, eruptions.
The north slope of Vesuvius is a privileged area for environmental studies because it preserves considerable remains of several eruptions, of which the Pompeian (AD 79) and the late antique ones (AD 472, 505/512) are the most important. Sealed by the volcanic fill, archaeological remains and ecofacts are well preserved and produce high-resolution data that are used to reconstruct the ancient environment and its changes over time. 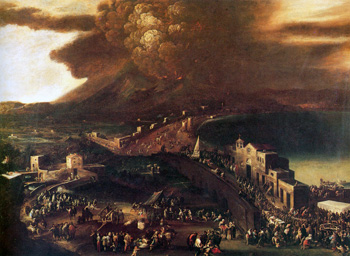 The Apolline Project investigates the relationship between mankind and nature on the north slope of Vesuvius and, more broadly, in the ancient territories of Neapolis and Nola. Still today this significant portion of ancient Campania is terra incognita, because the plain is almost entirely built-up and only a small percentage of what recently has been brought to light in rescue archaeology activities has been published.
It is the general opinion that Neapolis’ countryside in antiquity was small and mostly covered by swamps and marshes, and indeed so it was in the last few centuries, although there is not enough data to prove their existence in the classical period. The hypothesis of wide marshes led scholars to believe that communication between Neapolis and other inland productive areas, most notably Nola and Capua, was severely hampered. It is our aim to test this theory, especially considering the available evidence from the ancient and the Medieval literary sources; in fact according to these sources the plain between Neapolis and Vesuvius was bisected by the river Sebethus. 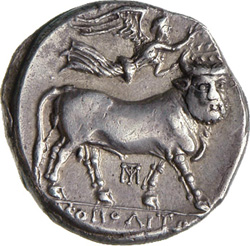 The river was worshipped as a man-faced bull and its picture was reproduced on the coins minted in Neapolis for the city itself and the other towns inland, Nola, Cumae, and Allifae, among others. The river was enriched by several streams which sprang from the slopes of the volcano and early Medieval literary sources provide the names for each of these. Archival research and new environmental data are helping us to reconstruct the plain as it was in antiquity, how it changed over time (and the causes of these changes), and how water resources were used.

Beyond Sebethus, the extant remains of Roman centuriation grids suggest that the entire plain, especially in the Nolan countryside, was densely exploited. 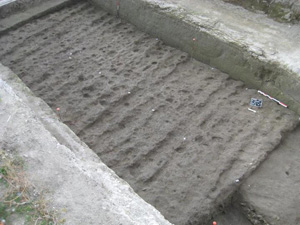 During some rescue archaeology activities small portions of ancient land have been brought to light. Covered by the volcanic ashes, ploughing furrows are well preserved and demonstrate cultivation of grains and vegetables. Other portions of the plain and the lower slopes of the volcano were covered by orchards and vineyards. It is our aim to provide a more detailed picture (i.e. proportions of the cultivated species, density, etc.) by matching archaeological remains and environmental data.
The higher slopes of the volcano and the Apennines were covered by woodland. The evidence is still too scant and patchy for a comprehensive reconstruction; most of the available data come from the Roman baths in Pollena Trocchia and the Roman villa in Somma Vesuviana. 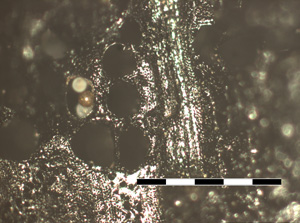 In the latter site, charcoal remains consist in part of chestnut, which is used also as a main construction timber. This piece of evidence suggested that late antique woodland on the northern slopes of Vesuvius might have included significant stands of chestnut. The evidence from the Roman baths in Pollena Trocchia, both charcoal remains and leaf imprints in the volcanic ashes and mud, will help create a more accurate reconstruction of how the land might have appeared.
Buried in the volcanic fill, carbonized leaves are indeed quite unique specimens of the plants and trees which were growing right around the site at the time of the eruptions. This evidence is being used for the micro-topographic reconstruction of the species cultivated (as opposed to charcoal and pollen, which can be transported to the final sampling location from a long distance). Furthermore, leaves from the later eruptive contexts (AD 505/512) are being compared to those from the previous eruption (AD 472) in order to understand how the landscape recovered from the first eruption and which species recolonized it.

A further field of enquiry is investigating the role played by woodland in the broader regional picture. Woodland was highly used in antiquity both as fuel and timber. 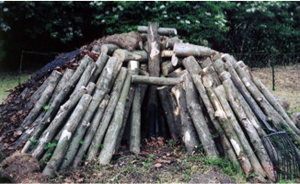 Wood, or wood charcoal, was the major source of fuel for industries such as pottery making and iron smithing. Domestic heating (especially of the baths), and cooking food also consumed considerable fuel. Timber was used not only for the house beams and furniture, but also for larger enterprises, like quarry exploitation throughout the region and the construction of the Roman fleet in Misenum. The towns which would have needed wood from Vesuvius and the southern Apennines were many: Neapolis, Nola, Acerrae, Calatia, Suessula, Sarnum, Abella, Abellinum, to list just the nearest ones. We aim to calculate the need for wood supply in this part of the region, to understand whether the resources available on Vesuvius would have been enough to satisfy the demand or rather the plain was dependent on the Apennines’ inland region for these resources. We would like also to understand how managed the forests might have been and how wood and charcoal were transported.

What we do on site 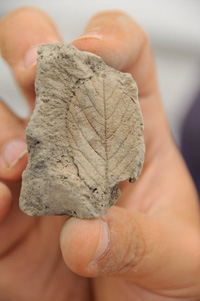 At our excavations, we collect organic remains (ecofacts), which have been mineralized or charred (some are charred by human activity and some by volcanic activity). Occasionally dessicated, or conversely waterlogged ecofacts are also found in archaeological sites (but none at our sites to date). Collection is by hand during excavation, through dry sieving and through flotation of soil samples through a fine mesh are also carried out. Flotation allows the collection of very small food items such as seeds, charcoal, and small bones and shells. The team has set up a basic environmental laboratory with reflecting and transmitting microscopes, a portable digital microscope, and flotation tank. In season collection of organic remains can now be complemented by real time analysis of some of the data. To date, we have examined bones, both human and animal, wood charcoal, and shells (terrestrial, marine and fluvial). Future studies will include wider examination of the surrounding territory through pollen analysis and soil studies to allow, in time, a full reconstruction of the landscape.