Study and restore the Roman Pottery

Our classes on Roman Pottery are developed to nurture new pottery specialists and advance research around Vesuvius. For 2019, we are rolling a month-long project on the pottery from the Suburban Baths in Pompeii and Pollena Trocchia, from the 1st to the 26th of July, and three introductory two-week sessions on the study and restoration of artefacts from Pollena Trocchia (June 3-14, July 29 - August 9, August 19-30).

The Suburban Baths in Pompeii 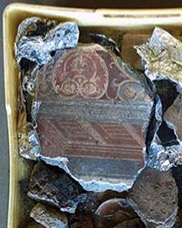 Since 2004 the Apolline Project has fostered research beyond the geographic and chronological limits of Pompeii and Herculaneum by nurturing a new generation of archaeologists in the “dark side” of Vesuvius. After 11 years, in 2015, we started a new and exciting chapter, by investigating “Pompeii beyond Pompeii”. The Suburban Baths are one of the most iconic buildings in Pompeii and famous mostly for the frescos with erotic subjects, but in our opinion the site’s evidence has been overlooked. Indeed the building, lying on a slope just outside the volcanic plateau where Pompeii was built, was only partially covered by the ashes of the AD 79 eruption. After the catastrophe, the local population returned and spoliated the marble decorations, while other potsherds show that the site was frequently visited also in late antiquity and throughout the Medieval period, until the end of the 18th century. Therefore the Suburban Baths have the potential to expand the history of Pompeii beyond the eruption. 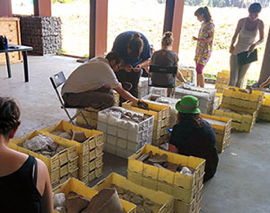 The Apolline Project aims to study and publish the site in its entirety, starting from the pre- and post-79 pottery, then moving to the frescoes and mosaics, then to the architectural features. Every year we process and study the artefacts from one room of the baths. In 2015 we took care of the remains from the piscina calida, which mostly consist of pre-79 artefacts. The results are currently in press in a book edited by the Archaeological Superintendency. In the subsequent years, activities focused on the nymphaeum and the laconicum, which provide also a decent amount of late antique pottery.
Work on this assemblage provides a good view on the pottery circulating in Pompeii, mostly for the pre-79 AD period and specifically from the 2nd c. BC to the day of the eruption, with a small amount from the period after the eruption.

Through these artefacts, students will get familiar to the major pottery classes while understanding how each room was actually used at the time of the eruption.

The Roman Villa with Baths in Pollena Trocchia 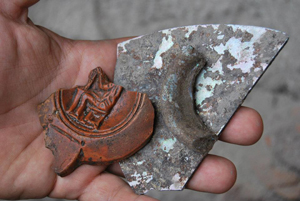 The site of Pollena Trocchia consists of a Roman Villa with Baths. It lies on the north-western slopes of Mt. Vesuvius, in the ancient territory of Neapolis. Here, on the “dark side” of the volcano, life started again immediately after the Pompeian eruption, already by the end of the 1st c. AD as this site testifies to. Throughout the centuries though, the originally lavish building changed its function multiple times, reflecting the economic flows of the Empire, until another eruption stroke in AD 472. The pottery assemblage reflects these stages and provides a detailed snapshot of life at the time of the later eruption.

Our digging activities at this site, which have run for more than 10 years, brought to light the largest late antique pottery assemblage in Campania, mostly dated to the second half of the 5th c. AD, with a great variety of all regional productions as well as of imports from the Mediterranean shores, with a good percentage of African Red Slip ware. 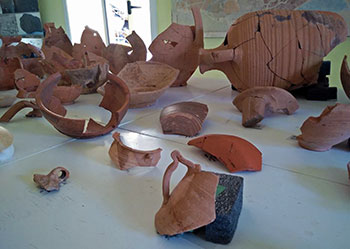 We have been studying and publishing much from this site (please visit this page and the others in the same section to know more), thus our understanding of the villa complex is fine-grained.

Students benefit from this experience and are motivated to partake in the analysis of specific contexts. Until now, we have studied and published most of the rooms pertaining to the baths, thus we are now moving towards those of the proper villa.

During the 5th century AD, many of these areas were used as dumping and cemetery (mostly with infant burials in amphorae), though the assemblage changes significantly towards the villa.

The course on Pompeii and Pollena Trocchia

Pottery is the most abundant archeological material discovered during excavations and it plays a fundamental role in dating archeological contexts, since shapes and styles change over time, as well as in food habits, ancient trade patterns, and their changes over time. Despite the paramount importance of this discipline, we witness to a worldwide decreasing number of pottery specialists, hence an increasing demand for them.
The month-long course on the pottery from Pompeii and Pollena Trocchia aims to teach the fundamental skills to process any ceramic assemblage from the washing and marking, to the different methods of drawing pottery; students will become familiar with the different pottery classes attested in Campania.
The study season includes a few formal lectures on specific topics in Roman pottery and much practical work on the potsherds, following our two-fold aim of studying the evidence while nurturing the most-talented archaeologists to become specialists. 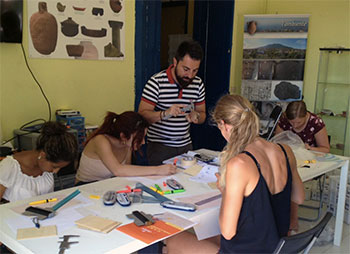 You will be based in our headquarters in Pollena Trocchia, a small, quiet town at short distance from Naples. You will be lodged in a late 19th-century palazzo and should expect the amenities to be on par with what is generally expected when staying in a hostel, as it is provided with kitchen, showers and washing facilities. We plan to carry out all study activities at our headquarters and organise three visits to Pompeii. Nevertheless, due to the recent changes in the heritage office at Pompeii, in case the permission to transport the Pompeian pottery will not be granted on time, we will commute daily (at no extra cost) to the ancient city to work on that assemblage and use our headquarters for the evidence from Pollena Trocchia.
The course will run from 1st to the 26th of July, at the cost of 800 EUR. To apply, click here.

The courses on pottery study and restoration

The course on study and restoration of the artefacts provides a comprehensive introduction to the current theories and practices in this fields, it is the ideal solution for both those who are new to the study of ancient pottery or are already fluent but want to become acquainted with the pottery classes circulating in late antique Campania or with the restoration practices.

After a general overview on how to categorise the objects and identify the pottery classes and types, the students will participate in all activities involved in the restoration of the artefacts, from the documentation (description, drawing, photography) to the first cleaning (with brushes, scalpels, chemical solvents), from the consolidation to the stitching to the final integration.

The study of the artefacts will proceed with powerpoint presentations alternated with practical activities such as division into classes, identification of shapes and types, basic skills in pottery drawing.

The contribution includes all tuition and accommodation in our dig house in Pollena Trocchia. Those who apply will find out if they have been successful within three weeks of their application. Beyond this the Apolline Project does not charge, and students will need to cover their own living costs and travel to Italy. For participants, we will provide you with information about how to get to the accommodations from the airport or train station once you have received confirmation of acceptance to the programme. Academic credit can be provided upon request and negotiation with your host institution. For some universities this may cost extra depending upon the policy of your particular institution.
Please consider that places are limited and the number of applicants is generally pretty high (150 in 2012), therefore we encourage you to submit your application earlier rather than later.